It was a weekend full of over...

My godson Sam celebrated his first birthday at Kenny Roasters Eastwood, Libis. Joan and I arrived on time as specified on the invitation, and waited for an hour (we expected that one-hour wait).

I enjoyed the 10++-minute AVP for baby Sam -- so much pictures in one year! I think he's got more photos now than I have in 20 years! Mommy Shan and Daddy Jay must have had a camera ready at Sam's every picture-perfect (and uhm not-so-perfect) moment.

The long wait does wonders to the appetite. I ate two sets of a combo meal that has one-piece chicken, one rice, one side dish, one muffin, and one cup choco ice cream. I handled the chicken and side dishes well, but my head ached when I cleaned up the muffins and two cups of ice cream.

It must be our family genes sending out the diabetes alert. Yikes!

Manny Pacquiao's newly-improved left hook and counterpunch routine were works of art -- tailor-made for Morales! Coupled with his untampered stamina (no bloodtesting this time) and the right Cleto Reyes gloves (knuckles get exposed the more you punch), even a tough tactician like Morales won't last under Pacquiao's power punches. I felt a bit sick watching the replays of that left punch he landed on Morales' head that brought the Mexican to his knees. Oouuch.

Pero bakit nauna pa siyang nayakap at nahalikan ng mga Kanong naka suit and tie, na kasimbilis ng kidlat sumampa sa ring? Are they the people who's going to rake in the millions of dollars from his victory?

FG Mike to PGMA over the phone (and in this case, heard over national television): "Te quiero mucho..."

Is it Valentine season already?
posted by Leo at 9:29 AM 0 comments

Hopped to Cez's page, found this link and read the accounts of this person and her friends.

And viola! My day is ruined.

No one forced them to go through that establishment. But they did -- armed with three cameras (and perhaps that oh-so-noble quest for learning), acted the way they did, concluded that they were being "judged" by onlookers (damn, they can read minds now?), and showed remorse by calling each other "Ugly Americans".

Oh well, what can you expect from those who think everything is supposed to be made for them? Their very nation operate under that same grand inspiration in its global affairs.

Pity, though, they got discouraged so easily.

I wish they do that again, this time right here in the Philippines. I'd strongly recommend they do it in Jollibee-Philcoa. They'll definitely get the learning they deserve, once these people step out of their comfort zones.
posted by Leo at 11:57 AM 0 comments

I wish my earphones are louder -- it's taking too long to drown the screaming in my head, generated by a week's worth of absorbing black aura from people with the gift of passing around anger like potato chips.

I wish I could do just that.

Thank God there's Metallica, Aerosmith, and Linkin Park in my playlist -- they compensate for the missing decibels.

The cute squeezeball I got as gift looks pretty roughed up. With the way things are going at the workplace, the poor thing won't last another week.

Started inking a drawing for a friend. I love the inking part!

I need to get that punching bag set up at the office's vacant space soon. Maybe that could speed up the de-stressing process.

The bottle of El Hombre stashed at the shelf kept peeking out teasingly at us. Heck, it's crying out to be consumed.

I was hurting in four places when I woke up morning of January 1. I had to chew two tablets of antacid to keep my stomach from rejecting anything I put in. And the first thing I did after greeting my mother and kasambahays happy new year was to check my last night's barong for holes, scratches, and dirt.

There was none. Not even a tiny speck.

And yet the bodily pains slowly grew distinct until I was able to count not four but five points that felt like they got stabbed by a blunt object. Right shoulder, right elbow, the back of my right palm, right thigh, and right shin.

Over breakfast my mother kept making me turn around to search for any sign of wound or bruising. There was none. Save for the gash in my right palm I got the other day for twisting a bottle cap that got jammed, I have no visible injury, even on the points where the flesh hurt when applied light pressure.

I remember staying sober last night until I fulfilled my duty of dancing with my mother in the grand "Rigodon de Honor", which was the highlight of the town's annual Father's Day/New Year celebration.

It was after the grand square dance that I started consuming everything friends, waiters, elder folks, handed me -- red wine, white wine, beer, tequilla, etc etc.

An hour before midnight I was laughing at everything. I laughed with folks who kept asking me how come I'm not marrying so-and-so because we look so good together, and later laughed with so-and-so when I told her what the folks have been telling me. Some folks thought I already got married, while majority got the date correct.

Thirty minutes before midnight I left my mother to say hello to my elementary school friends gathered in a house not far from the town hall. More beer.

At the strike of midnight, I rode the motorbike and made my way back to the hall, weaving past street dancers and people staring skywards to watch the fireworks.

What happened next was a blur.

The bike's front wheel hit a coco-lumber sprawled diagonally on the unlighted part of the street. The bike slid sideways as I tried to support my weight with my right leg, and came to stop with me lying on my right side.

I was up and gunning the bike's engine by the time one of my friends caught up. A quick scan of my appearance and he slapped my back, greeted my happy new year, and sent me off.

By the time I got to the hall, a text message from my mother told me that she already went home. At home, we sang videoke and drank some more for another two hours before everyone finally went to sleep.

How my barong stayed unscathed remained a mystery, and was momentarily forgotten after breakfast. Maybe I imagined the whole bike incident...

It was morning of January 2, as my mother and her driver were about to leave for office, when they made another discovery on the bike. It made my mother run upstairs to my room and wake me from my slumber.

The rear part of the bike's seat was smeared in blood, with bloody handprints all over it.

Definitely human blood, says the driver as he wiped it off with a wet rag before I could say "stop-let-me-take-a-picture-of-it-first!"

Sigh. I hate it when I forget things. 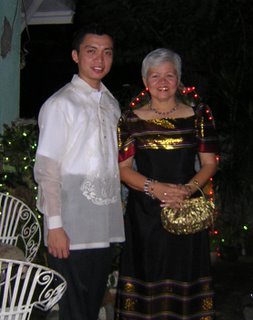 With my mother after the festivities, and the barong that somehow defied explanation. ^^