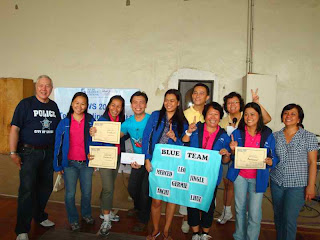 When the sports committee posted the team assignments a few weeks before the sportsfest, one team was expected to be the strongest, fastest, and the most winnable of all.

Because over half of its members are men.

I guess the organizers designed the teaming to be fully random, save for one condition that ensures at least one man per team. It did not, however, control for the maximum allowed number of men per team.

And so this team, which has four men and two women, was seen as the team to beat.

But after two rounds of bowling, and a delightful round of dodgeball, banana-eating race, t-shirt relay, and paper plane flying race, this said team had the least number of wins, and ended up at the bottom of the overall ranking.

Our team, composed of one man and five women (one of them still healing from a broken pelvis after an accident, while another has spinal problems), got the highest average team-score in bowling and ended up the overall champion.

The best bowler award came as a surprise.

The original rule was that the winner will be the one with the highest score in a single game. After two rounds, everyone knew who won.

And it wasn't me.

I didn't get the highest ever score in a single game. I was writing an urgent media release in between rolls so there's no way I could bring myself to break the 200+ mark (asa pa haha!).

The plan changed, however, when the stations' big boss pointed out a flaw in the original rule.

During the awards ceremony, the organizers announced that, after their meeting with the boss the previous day, the rule has been revised to put value on "consistency" instead of "one-time stellar performance".

And so the event's biggest surprise came that morning: I got the award, for having the highest average score.