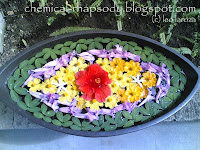 Recently I have been blessed with nice people.

Last month, people from Hungduan, Banaue worked together to get back my wedding ring after I lost it there during a two-day visit.

Last night, a commuter found my cellphone inside a tricycle in Sikatuna Village and returned it to the office.

I admit that, in both occasions, I lost hope of getting those items back.

For the wedding ring, I readily assumed that the chances of finding it in the vast schoolground of a rural barangay in Banaue -- much more find its way back to me in Manila -- would be as slim as getting interviewed in one of SWS' national surveys (the chances of winning the jackpot in the lotto is much bigger). Reporting it to SitMo seemed a proper thing to do at that time, but all the while my hopes were at the minimal.

My expectation of getting back my cellphone was even lower.

Neither I nor my officemate could remember the body number of the tricycle we rode yesterday, but just the same, I told the Vice-Chairman of Philcoa TODA (Tricycle Operators and Drivers' Association) about my missing cellphone.

When I got home to Makati, I dialed my cell number, fully expecting the succeeding rings to be cut off or be ignored. I was pleasantly surprised to hear a kind, almost apologetic, voice at the other end.

I already lost two mobile phones in my lifetime (through no ones fault but my own), and both experiences were extremely unpleasant. Whoever got the first one is still using it to this day (too cheap to buy a new SIM card, that creep), while the other one sent stupid sex jokes to random contacts in the address book for almost a month before it finally stopped. My goodness!

And so this passenger gave me another reason to have faith in mankind. I'll meet her sometime this week to personally thank her. ^^

***
Silver linings typically comprise the smaller part of the big picture. Behind each pleasant story I shared above are tales that make life a little less brighter than we would have wanted it.

After the people of Banaue returned my wedding ring, I had it re-sized for a better fit, while Joan had both her engagement and wedding rings cleaned.

Though I'm not a very trusting person, I was not raised to be overly suspicious. We've had a good relationship with the company that provided our rings, and I was under the impression that "re-sizing" only involves "shrinking" the size, and cleaning is just "cleaning".

I definitely never thought it would involve "shaving off" layers of metal.

Now my ring has a better fit, but it's thinner and much lighter. Too thin and too light, for a simple re-sizing and cleaning job. Even Joan's rings do not feel as heavy now.

I'll file a formal complain to the company's quality control. I wish we weighed the rings before we had them cleaned, for evidence.

Yesterday when I lost my cellphone, I searched the Philcoa terminal for any representative of their TODA, and met their Vice-Chairperson Dante. He took note of the details, but without any helpful info about the tricycle or the driver, he told me there's no hope of getting the phone back.

"Ser, 'wag ka sanang magagalit pero kung ikaw ang drayber at may nakita kang cellphone na de-kamera, isu-surender nyo po ba 'to sa akin?" (Sir, I hope you won't get mad, but if you're the driver and found a cellphone with camera, would you surrender it to me?)

When I got home to Makati last night, my sister in Liverpool called and told me that buglars broke into their home and got away with a considerable amount of cash, jewelries, and personal belongings.

But the incident will not stop their plans of going home next month, plus their insurance has kicked in to put their minds at ease just a little bit.

Life's a struggle to find that silver lining. If you look hard enough, there's always a reason to smile at the end of the day.

A blessed and happy Easter to all!
posted by Leo at 8:51 AM 0 comments 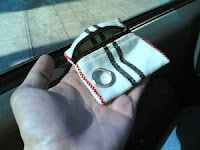 My wedding ring got lost on the night of February 9, at the school grounds of Hapao Elementary School during a cultural show organized by SitMo.

It was handed back to me this morning by Jun, a staff from the Office of the Mayor of Hungduan.

Thanks to Weng of SitMo, who chanced upon my blog on February 20, and called up Hapao Elementary School.

As it turned out, a Grade Six pupil found it, but they didn't know where to return it until Weng spoke with the Principal. From then on, Weng facilitated the ring's transport all the way from Ifugao to Quezon City, with the help of Grace and Jun from the Office of the Mayor, Hungduan.

To Weng, Nilo, Vlad, Grace, Jun, all of SitMo team, the Principal of Hapao Elementary School, and the Grade Six pupil who found my ring...

***
This incident with my wedding ring reminded of how coordinated and cooperative the people of Hungduan are. It wasn't obvious at first, when we arrived there on Day One.

It only became apparent to me when we were on our way home.

As we left Hungduan, we passed by not one, not two, but three drunk men along the way. One thing was common -- they all look peaceful. Intoxicated, yes, but all with contented looks on their faces, quietly (and wobbly) finding their way home after a long day.

We pointed this out to Nilo, who then explained that the day before, a liquor ban was imposed in consideration of the visitors.

No wonder there was not a single "eksenang inuman" around the town during our visit.