This usually happens to me when I sleep in an unfamiliar place, or specifically, “namamahay.” So here’s a quickie entry, while the dream is still fresh...

I was in a big house with five businessmen. I went out with two of them to roam a busy marketplace, much like the ones in Divisoria or Baclaran, in search of a legendary shoemaker. We found him busy at work in a small shop full of not shoes but wood.

A fifty-something man with graying hair and sparse moustache, he reminded me of one of my betel-chewing uncles in Batangas.

He was working on a piece of furniture, and was driving ten-inch nails, with surgical precision, with a single smash of his hammer.

Maybe that makes him an even better shoemaker, I wondered.

And so we invited him to the big house. He sat down beneath on a stool beneath a cage with a yellow bird, and started to work on the shoes. Lots of shoes! All leather, expensive-looking shoes.

Then the scary part began.

At first it was a scratching sound that came from underneath the wooden floors, then a clear noise of something moist slithering through smooth surface. The old man stopped, and peered down a two-inch diameter drain fixed on the wooden floor.

The “thing” leaped out of the drainage – a gooey mass of dark green – swallowed the entire upper body of the old man, and pulled him back down in the drainage. How it managed to squeeze a fully-grown man through that drain was... scary.

Not one of the five businessmen noticed what happened as they went on with their own affairs – which is doing absolutely nothing. Some were standing, some were seated, but all were staring into nothing.

I went down the basement to search for the old man, and found an abandoned subway station. The dusty benches are full of cobwebs, and the rusty railroad tracks were broken and twisted. I called out for the old man, and I heard echoes coming from the pitch-black tunnels.

Suddenly, a group of high school kids came down through the basement and gathered in one of the dusty benches. One of them played the guitar, and in no time the whole place was filled with songs, loud voices, and laughter.

I went up back to the house, and saw a familiar person – my fiancee.

The moist, slithering sound filled the house, and grew louder and louder.

I shouted for everyone to go upstairs.

As the businessmen snapped out of their zombie-like state and rushed up the stairs, the “thing” burst through the floor and erupted into hundreds smaller versions of itself, eating and gnawing everything they come into contact with.

I called out to my fiancee to follow me upstairs, but she and another lady ran in the opposite direction to another room. They were able to slide the glass door shut just as one of the “things” made a jump for them.

Somehow, in that dream, I felt a bit sad because my fiancee chose a different escape route. But as I woke up, I knew she made the right decision.

We are different in so many ways, but somehow here we are, surviving and growing together still, and soon to live as one.

Hey, the Philippine flag is at the Mt. Everest summit. Isn't that something?

Cheers to the RP mountaineers for that wondrous feat. This country could use every bit of feel-good news it can get.

But while it is not an issue whoever reached the summit first, wouldn’t it be nice if a fact-finding group actually go out to get the real accounts and details from the “mystery climber” himself? – just so the record could be set straight. The Guinness does that, so why can’t we?

It took just one visit from my fiancee to get the Kampo cleanup started. Haha! Talk about getting a kick start. She is, after all, the one who discovered the place, and she deserves the best it has to offer.

We managed to clean the restroom, kitchen, and one of the two rooms for the whole Sunday afternoon. I now have a longer list of stuffs to buy from the hardware shop.

We have miles to go to get Kampo in tip-top shape again, but we're getting there.

After staying there for over two years, I'm rediscovering how nice Kampo is. Very soon we'll let go of that place, and it would surely break my heart (a bit) when that time comes.
posted by Leo at 11:00 PM 0 comments

All this fuss over The DaVinci Code is simply stoking the public’s interest about the film. For me, interest = curiosity = view the film, or read the book = big bucks for the producers/publishers. And the only thing banning the film in this country will do is give the pirated CD/DVD dealers a reason to dance in the rain.

Speaking of rain, my body, as always, despises the sudden drop in temperature – it developed a sloth-like agility, generated throbbing headaches strong enough to make me puke, and has now conquered my beloved insomnia (not good at all, considering there are urgent things to finish this month).

But thank goodness no major illness has befallen me so far. I hope you guys stay healthy in this weather.
posted by Leo at 11:58 AM 2 comments

This morning was the *cough cough*nth time I came in late for work this month. The good news is that the margin from that precious 8:59am mark is getting smaller and smaller. If my projections are correct, by tomorrow my body would have fully adjusted to wake up on its own ON TIME.

My excuse for oversleeping this morning: we attended a small despedida get-together for my fiancee's newly-wed officemate.

The sad part is, it is only the husband who will be flying back to the U.S. The wife, my fiancee's officemate, will be left behind and probably would take months before she could join him.

The couple have only been together for a week after their wedding. I couldn't describe the sadness as the couple spent the last hours together, all I can say is that I was close to rushing to the restroom because of so much tightness in my chest and stomach.

Good thing there was a magic microphone in the house -- we sang to our hearts' content until we left for the airport at around 3am.

An afterthought: Last night's videoke session reminded me that "kung gaano kaganda ang isang awitin, ganun din iyon kahirap kantahin" (the lovelier the song, the harder it is to sing it... tama ba?). Good thing no one else scored higher than my record of 96, thanks to that ever-reliable song that never fails to redeem my earlier blunders -- "My Way". ^^ jk.

I've turned half of Kampo into a makeshift DIY shop: the dinning table became my worktable for the wedding invitations, and the vacant room is where the souvenir boxes get painted, as well as a temporary storage room.

There is lots of work to be done with the place, but somehow I just freeze when I think of where to start.


My gaming life has been put on the sidelines since the wedding preps, but a certain restlessness would creep every now and then into my system, and it can only be pacified by logging on to any of the online games left in my PC.

The collection of games in my PC has evolved, and the common denominator is they’re all free-to-play.

I blame it on one fateful night when none of the nearby shops had top-up cards for any of the online games I play. That singular moment of frustration made me search for an online game that is free anytime.

After some searching and trials, my new favorites are: Silkroad Online, Pangya, and FLYFF.

I miss the ones that I started out with on online rpgs, but it has become play-on-demand for me, and searching for a top-up card in the middle of the night is something I don’t want to worry about anymore. 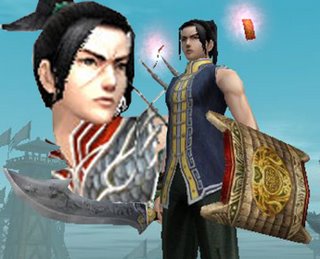 Grand eviction night, and the week after

Kampo is the apartment my housemates and I have been renting for over two years. The place is near a police camp, thus the nickname.

My fiancee, who found the place in the classified ads, referred it to us in July 2003. By August 2003, five housemates moved in. In a span of over two years, the original five has come down to three.

After the grand eviction, Kampo is left with one housemate -– me.

It was nothing like Pinoy Big Brother, though, where housemates get evicted for violations, tactical nominations, and text voting. It was a favor I’ve asked of my now former housemates: that I get to solo Kampo two months before my wedding.

They agreed, and for this I owe them big time.

That night also marked the end of my lifestyle of co-habitation.

For the longest time, I’ve spent my life living with people outside of my family, in places dictated by my choice of educational institution and, eventually, workplace -- a typical lifestyle of a promdi whose permanent address doesn’t even have a street number.

It’s been a week now since I had Kampo for myself. It’s almost surreal. I’ve forgotten the freedom of living in a space that’s totally your own.

Absolute silence and darkness suddenly became things that I command and control, not just something I wish for. Time, for a while, became obscure with the sudden disappearance of other people’s rituals (that explains my sudden tardiness at the office).

I’ll be enjoying these rare, small moments for two months. 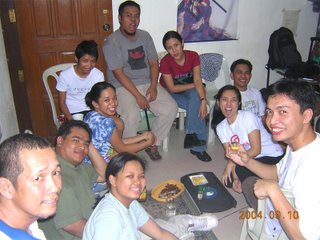 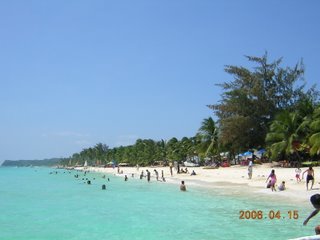 My short visit home wasn’t as hectic as I expected. I remember sleeping one whole afternoon, riding around town a bit to say hello to old friends, and going Boracay.

The island always has something new, and each visit gives me a reason or two to be both sad and happy.

The not-so-happy things about Bora are mostly found behind the beach front.

Politics has dipped its dirty hands in the island’s lucrative tourism business.

The indigenous people are slowly losing their land to big corporations and politicians.

Take a motorbike tour at the island’s interior – if you find a piece of vacant land that has no “Private Property” or “In this site will rise so-and-so hotel” hanged at the barbed wire fence, you can bet that it’s already reserved for a big politician or a crony of whoever's in power.

Finally, the island is an ecological time-bomb.

Should you get to visit Bora, take a trip to the highest point at Mt. Luho. For a donation of P50 pesos, you get a full view of the island from end to end (and get your hair and scalp picked by their resident monkeys, if you like).

So if you’re wondering where all the island's waste and garbage go, or how small the patch of land is left for the indigenous tribes, or how big the upcoming hotels and golf courses will be, this place will give you an idea. 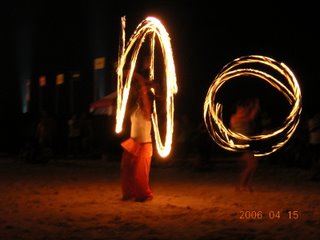