Of tai chi and pirates

The unpleasant thing about Mondays is that it's the deadline for most of the unfinished work last week. And to make it worse, your body hasn't really snapped out of its weekend-mode.

I'm particularly sluggish today. Yesterday, Joan took me on a tour and trial workout in her fitness club. For five hours we tried out the machines and attended two of the club's group exercises: tai chi (the "silent body killer") and Body Balance (the "not-so-silent body killer").

Note to self #1: Never take tai chi and Body Balance together in one afternoon, or even on the same day.

Note to self #2: I have no problem whatsoever achieving the wuji or empty pose of tai chi. Nose aligned vertically to the navel, knees slightly bent, shoulder relaxed, hands hanging on front of the thighs, tailbone tucked, and butt pushed slightly forward.

A lanky frame that spends most of the time seated in front of the computer + a not so well-endowed butt = wuji.

Two hours of basic Tai Chi put most of the pressure to thighs and legs, while the so-called Body Balance is a mix of Tai Chi, yoga, and pilates, strung together in a one-hour full body workout.

Now my abdominal muscles are so sore it hurts to just cough or laugh. Walang magpapatawa today! Arrr!

But it was a refreshing weekend, plus it's a good way to bond with your spouse. It reminded me of our martial arts sparring days, back when our motto was "I will hit you because I want you to learn" or something like that. ("Here, Mahal *pushes you to into a leg split*)

Arrr! That stretching did good to me seafarin' legs!

I'd hate to be the captain of the Flying Dutchman.

One day at shore and ten years at sea?

Another election season is coming to an end. Thank God for keeping the people vigilant, and for keeping my mother safe. I pray still that there be no further violence as the counting proceeds.

This would be my fifth election since I reached voting age, and the fourth since I joined an organization with an advocacy to listen to public opinion, including voting preferences.

Being in such an organization has its perks and disadvantages.

I had not voted in the 1998, 2001, and 2004 elections because we were stationed in the provinces to observe and supervise the conduct of the exit polls. Region VI, which includes Aklan, Iloilo, Antique, Capiz, and Negros Occidental, was my typical area of responsibility.

But while I had not exercised my right to vote, I had the chance to travel and meet some of the most interesting people.

In the past three elections, we were like storm chasers braving natural and man-made dangers, interviewing as many voters as possible during the voting period, executing a week's worth of preparation in just one day.

It was exhilarating, and at the end of each election season, whether or not the exit polls hit the bulls eye in predicting the election results, the feeling of accomplishment was indescribable.

This year's election is a bit different.

There's no exit poll for us, but what we lacked in the day-of-election survey, we made up by pulling off as many pre-election surveys as possible, keeping the media busy with an average of three media releases a week and accommodating as many TV and radio interviews as possible.

In short, we made sure the name SWS was in at least one major broadsheet daily, and mentioned in the airwaves at least once everyday, before we take a break on election day.

I guess we did a decent job doing that. 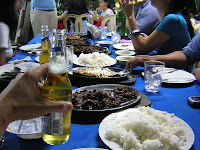 At the end of our last survey prior to election day, when the data had been analyzed and reports were submitted, the Techies had a chance to breathe a sigh of relief, and take a short break.

That night, a bottle of beer saved me. 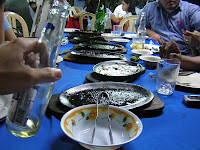 It took just one San Mig light (and lots of Mang Jimmy's yummy grilled delights) to unravel the knots in my hyper acidic stomach, ease the tension in my caffeine-soaked body, bring sleep to my double-bagged eyes, and silence the ringing in my head.

And that night, after the longest time being cooped inside my cubicle struggling to keep up with the deadlines, it felt good to see my fellow Techies again in a different light, and listen to them talk in a different language.

I missed them a lot.

We went on a trip for a much-needed break on the day of elections. I’ll write about it next. 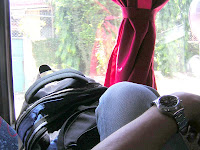