As of blog time, I’m still feeling weak after a stressful day.

I’m used to the first two, they happen on a regular basis. The third one caught me off-guard today.

When you can’t reach someone who was trying to contact you just seconds ago, the mind could conjure the worse possible scenario.

Did the phone lose power? Maybe. Or was it turned off? Is the person okay? Is there an emergency?

When these questions go unanswered in the first sixty seconds, I’ll be a whirlwind in the next three minutes.

Mercifully, the signal came back after several agonizing minutes. Within that time I have dialed five numbers -- three of which did not answer, while the other referred me to the fifth person, who also came up blank.

Panic. It doesn’t happen to me often, but what an unpleasant feeling it is.

I have a tendency to over-react, it seems. In the end, I realize I have too many unfounded worries, leading to unnecessary drama. So sorry about that.

What a month May was!

Just when I was giving up on my hopes of getting some summer sun and sand, along came two invitations – one from Joan’s office and one from my mother – that gave me my quota of sunburn for this year.

Last month also felt to me like Life just handed out a generous serving of lessons about myself and others.

Some lessons were old, most were unfamiliar. 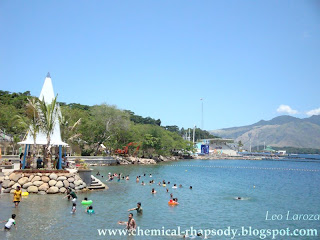 I joined Joan’s office outing to Adventure Beach at Subic last May 16. Having met her officemates only a few times in the past, my initial impression was that this was going to be a small-group affair.

The day before, however, the attendance was confirmed at an impressive forty plus persons, including kids.

With a group this big and without any reservation, the plan had to be simple: get to Subic as early as humanely possible (meaning, without waking up at 4am), and secure a spot.

Driving through Subic-Clark-Tarlac Expressway (SCTEX) with the speedometer stuck at 40 kph wasn’t a very relaxing experience, but it did help a bit with our schedule: by sticking with whichever vehicle was going faster, we arrived at Subic early enough to secure two front-beach cottages at Adventure Beach.

The CA people was a crowd so different from any I’ve been with – maybe because the CA people themselves comprise only half of the group, while the rest consist of family, relatives, children, spouses, and friends.

Anyway, it was a fun day. I never realized Joan is such a strong rower at kayak. We could have gotten far off shore had it not been for the rumors among resort staffs earlier that a shark was sighted nearby. *shudder*

We unwittingly made a scene when I dropped off the kayak to dive. From the cottages where Joan’s officemates were watching, they thought we were having a fight, and that Joan threw me off the kayak and left me behind. Haha!

At least they know now that I have an addiction to swimming and skin diving.

We have a few more photos shared here. When my brother and I arrived at Kalibo airport last May 23, we noticed another plane with an unfamiliar logo. We were told later that it was an international airline.

Anyway, we went home to Batan to give support to our mother as she turns over leadership of the Batan Youth Circle (BYC) to the next set of officers during its 50th Anniversary.

It was an evening event, so my brother and I had time to visit a nearby beach resort for a swim.

On our way to the beach, I was reminded of how popular my brother is despite his long absence from our hometown. Among us siblings, he had the most years spent in this town, and has earned quite a reputation for himself. Like our mother, he is unmistakably a true-bloodied Batangnon.

The 50th Anniversary of the BYC celebration was a night of many firsts.

For the organization, it saw a fruitful year under the leadership of its first lady President. From what the locals are saying, it was also the first time a BYC anniversary had that much attendance.

Some photos from that weekend are shared here.

***
I always seek out and embrace the unfamiliar, learning as much as I can about others and myself.

But at times I get reckless, ignoring the warnings in my head as well as from those who know better. At times I end up revealing too much of my self, exposing things that I myself am unfamiliar with.

This is what I am.

But hey, you learn something everyday. Cheers!
posted by Leo at 6:47 PM 0 comments