The office Christmas party, held last December 21 at our boss' house, had the 80's as its theme. Considering it's the era I grew up with, conjuring the 80's look should have been a breeze.

But alas, my precious 80's outfits were carefully stowed and sealed in a chest in the ancestral home in the province. Had the announcement about the theme been made a tad earlier, I might have had the chance of strutting down the catwalk in my Menudo look.

Anyway, it was a great evening.

It was the first time I drank that much beer again since Penn passed away.

Before Penn's untimely demise, drinking sessions for us were spontaneous – never planned nor something we look forward to. They just happen at the slightest nudge here or a small hint there.

And just as unpredictable is the amount of beer to be consumed. Since our suking sari-sari store owner count us as well-paying customers, the credit line she gives could sometimes take the drinking sessions as far as our stamina will take us.

But Dec. 21 was something I looked forward to. It was something I planned amid the soul-crushing pressure of work faced by the Techies and the rest of mother station just before we all call it a year.

And so drink beer I did – I needed it, and I would have snapped if I didn't get it – at the same house, while playing on the same billiards table where Penn had his last game and his last can of beer. Cheers.

What a tough year this has been. Eventful and replete of blessings, which I am so thankful for, but tough nonetheless.

Merry Christmas and Happy New Year to all! 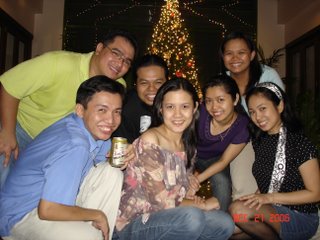 Deprived of the grand prize for the past two years, the Techies made up for its losing streak by looking really, really good. *ubo-ubo!* (l-r: lei, vlad, mic, mear, cherrie, mae, and lynn)
posted by Leo at 10:49 PM 0 comments

Prayers go out to people in Albay and all those who were affected by typhoon Reming...

There were only two occasions when I got starstruck.

First was when I was introduced to my favorite lady disk jockey some years ago during a charity event in UP Diliman.

I can't remember how our conversation went, but I recall how clammy my hands felt from sheer nervousness. It was an unexpected encounter, so I never had the time to prepare emotionally (Ewww baduy. Harhar!).

She is now a popular TV personality in the field of sports and fitness.

The second was when Joan and I watched Day Two of the 2006 World Pool Championship, held for the first time in the Philippines from November 4 to 12.

I'm not a sports fan. It's a title best reserved for those who devoted their spare time following the careers of their chosen personalities and knowing the intricacies of the game.

If I happen to have a few trophies here and there, it is because I had the honor of having a brilliant pool player and sportsman as a housemate for over five years.

Cheers to you, Penn.

And if I happen to know some stories behind the big names in the world of billiards, I owe it to our boss who kept his staff informed of both the history and the latest news every time we find the rare occasion to play in the office.

To see these big names up close and in live action was another experience entirely, especially when you get ringside seats (thanks to our boss' complimentary tickets).

Here, I realized there are so many things the TV camera cannot capture: the sound of Efren Bata Reyes' cue stick slamming the steel floor when he makes a bad positioning; the funny faces of Steve Davis when he acknowledges the crowd behind his seat; the steady, stoic expression of Radoslaw Babica despite the hecklers from the Filipino audiences; and, (sigh) the hecklers from the Filipino audiences.

Pinoys have a long way to go when it comes to audience etiquette and phone manners. The world will remember how Django Bustamante got messed up because somebody from the crowd answered his phone while he's in mid-swing, and how a fan took a flash photo of him during his shot.

Watching the game live was great -- we saw how real and human the pool legends are while they lounge, chat with fans, or walk around the hall looking like ordinary folks. Only when they wield their cue sticks and step to the tournament table do they change into something else -- Masters!

But in the end, Joan and I agree that we still prefer to watch most of the hours-long matches on TV, with a bag of nachos, spicy salsa, and ice-cold coke at hand, listening to the witty sports commentators.

Congratulations to the champ, Ronato Alcano!

And cheers to Manny Pacquiao, too.
posted by Leo at 10:25 AM 0 comments