Joan and I stood under the rain for hours at the South Superhighway yesterday to see President Corazon Aquino's final journey.
Neither of us were personally present at the People Power revolution in 1986 -- we were both in fifth grade in the provinces when it happened.

The sheer crowd of masses yesterday, however, gave me a certain sensation: if this isn't People Power, nothing else could come close.
But there were no angry shouts of protests. There was no trace of violence in the people's faces.
There were only love, gratitude, and admiration.
Farewell, Pres. Cory. 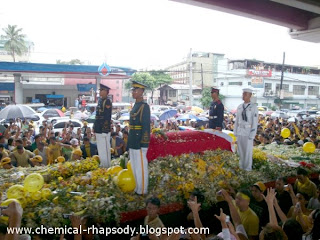 Some more photos of this brief moment here.
posted by Leo at 11:03 AM 0 comments 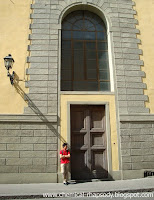 July 16-23, Florence, Italy. My presentation at the 9th Conference of the International Society of Quality of Life Studies was about satisfaction with democracy and quality of life in the Philippines.

It was scheduled at 8:30 am, and apparently it’s a time that most of the conference participants find difficult to attend. It was hard for me to wake up early too. The Italian summer nights are so short – it’s there where I first wore sunglasses at 8pm, and the sun still rises at 6am.

Few participants made it to my talk. Thanks to four of my colleagues in SWS (the five of us were the only Filipinos out of over 300 participants) and those of my co-presenters’ from mainland China, Singapore, and London, the beautiful, ancient dungeon that was converted into a classroom didn’t look so empty and lonely.
It was a 20-minute talk, which I find too short if one is to discuss over 50 years of Philippine history as a nation. So I breezed through the highlights of the country’s experience with democracy.
I placed special emphasis on 1986 – President Cory, People Power, and restoration of democracy. The regular study of democracy, subjective well-being, and public opinion in the Philippines became possible as certain liberties such as elections and freedom of speech were re-established after 13 years of dictatorship.
So how’s democracy doing so far? Unfortunately, the democracy that President Cory re-established eventually gave birth to a new breed of corruption. But while we are sick of it, the idea of democracy is something we, as a people, are not ready to abandon.
There’s always hope. We’ll see how democracy plays come Elections 2010.
****
July 16-27, Florence, Pisa, Rome, and the Vatican, Italy. There’s extra happiness everywhere. 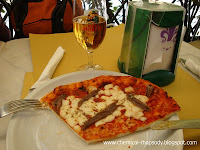 It’s in every local beer I occasionally had during lunch and dinner. Nothing compared to my all-time favorite San Mig Pale Pilsen, but their delightfully potent 4.5% to 5% alcohol buzz took away all my pre-presentation jitters.
It’s in the lovely scooters that dominate the narrow, cobbled streets of Florence. Here, these pocket rockets look so pristine and classy, far from the ones we see in the treacherous streets of Manila.
It’s in all those delish pasta, pizza, Mediterranean foods, and gelato! Yum! 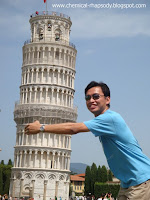 It’s in all the beautiful sights, artwork, pieces of history, and symbols of faith that used to be just pictures. To see them, touch them, walk through them, breathe them, climb them, do all sorts of poses next to them, and pray before them was a wonderful experience.
It’s in that very rare chance to run into someone whom you haven’t seen for more than ten years, in a place that you least expect it. In case you’re reading this, Van, it’s good to see you again. Mukhang pinakyaw n’yo yung nasa souvenir shop ng St. Peter’s basilica haha!
It’s in every little chance to see something good. The ice-cold water that comes from every fountain scattered around Rome, the amazed looks from locals and tourists alike every time I deploy my handy-dandy extendable camera monopod, and that nice feeling of not hearing a single car horn during the entire visit.
I had some share of unpleasantries, but not enough to deserve mention in this blog.

****
Well-being. Happiness. All subjective concepts that can be gauged by equally subjective measures.

President Cory ushered in a way of life that has been giving legitimacy to the kind of democracy we know now. This democracy has evolved – it’s crazy, and we’re not afraid to let the democratic institutions know how much we’re dissatisfied with them. But like an old car that has served us through the years, we don't see this particular democracy as something that needs to be replaced.

It just needs fixing.
When I went to Italy, I refused to be a tourist, but instead be a guest. With Joan’s help, I tried to learn some of the basic etiquette in this locality: I kept my voice down when speaking in Filipino or English, I greet shop and restaurant owners and staffs in Italian, never starting a conversation directly in English, and I try to be mindful where I point and shoot my camera.

The returns are subtle but measurable, and worth every bit of the effort --

A lovely smile, or an extra scoop of my favorite nocciola gelato.