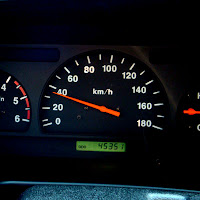 Had it not for the Metro Rail Transit (MRT)), I wouldn't have noticed I was driving faster than I usually do in EDSA.

The reason: the speedometer got stuck at 40 kph.

My peripheral vision of the dashboard was unconsciously telling my brain to tell my foot to push down on the accelerator.

But when you're going faster than the last southbound MRT running full-speed in between stations, you can be sure you're hitting anywhere over 60 kph.

Too fast for my usual pace in the usually crowded EDSA.

The busted speedometer has since been quietly messing with my head, subtly bringing out the monster driver in me.

I better get it fixed before it's too late. Haha!

***
Watching myself in any form of audio-visual recording always creeps me out.

The voice pitch is too high, the posture too... weird, and the person looking so different from the one I see in the mirror.

To some extent, even photos have the same effect. I recently browsed through our pre-nuptial photos, as well as other old photos (oh the memories!) again, and felt that same eerie feeling.

Sometimes it really does take a third person's perspective to know some little known facts about yourself.

It's the same for the way we act. At least once in your life, someone will tell you what you need to know about yourself.

Bless the Simons in all of us.

***
It’s been raining over the past month, but none seem to compare to the one that came late last week.

This one arrived with such refreshing force that it made the air a lot more breathable and a whole lot lighter that I couldn’t help but smile – however toxic the days have been, and will be in the months to come.

It was the rain that I’ve been waiting for. The one I look forward to feeling again.

After watching the pre-fight documentary, “Pacquiao-Hatton 24/7” – which was superbly done, by the way – I’m convinced it’s going to be everyone’s fight.


As of blog time, I just heard over the radio the surprising win of Pacquiao. Just two rounds.

None for the boxers. They are both great fighters.

Only for their trainors...