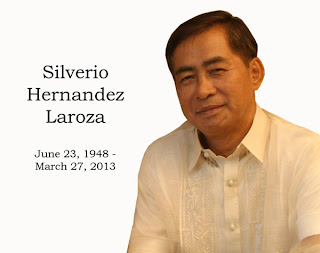 Fondly called Ver or Biyo by his friends, family and relatives, Dad began his teaching career in Manila before spending most of his years as an educator in Aklan.

If anyone thought the Akeanon language is difficult to learn, Dad learned it in less than two years. Not bad, huh?

He returned to his hometown after retiring from the teaching profession, and was elected Councilor in 2010. He left behind a legacy of hard work and camaraderie among his colleagues and community.
He was laid to rest at the Saint Joseph Catholic Cemetery on April 3, 2013, after a mass held at
Saint Joseph Cathedral, San Jose, Batangas.

We love you, Dad. God bless and rest in peace.
***
This was, more or less, how I announced Dad's passing in fezbuk. It felt like I was writing for the office.

There's so much more to say about Dad, only I don't know where to start.

Dad has always been the pioneer in his family. He was the first among his clan to marry someone from the Visayas -- a very brave thing, considering the word Bisaya only meant two things among Batanguenos back in the 70s: a household help, or a sex worker.

Well, Mami, armed with education and that never-say-die attitude, shattered every stereotype Dad's clan had about Visayans. But that's another story.

Truth be told, I only know Dad as a father. A very, very strict father. Imagine leather belts, hours of solitary confinement, clean-my-gun-while-you-entertain-your-suitor hospitality, and dagger-looks -- yeah, that kind of strict.

But there were tears in his eyes when a two-inch needle was being inserted to my vein for a blood transfusion when I was in highschool. I knew then that he loves all of us, his children, so dearly. He's just not good at showing it.

Joan and I were already in Batangas on that same evening of March 27. Only then did I know my Dad as someone else -- a friend and a public servant -- from the eyes of his many relatives and colleagues.

Listening to so many stories, I knew Dad's has fulfilled his dreams, and he went away peacefully and contented. There was no heaviness in my heart, and I never bothered hiding my eyes.

I only cried when I whispered my last goodbye, and laid the rose on his casket. It felt so sad thinking that we are leaving him behind in that lonely cemetery. 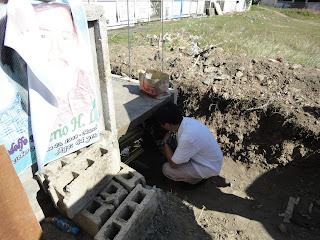 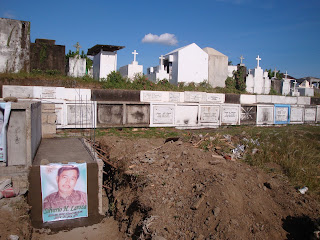