I have secretly dreaded this word since I took on a bit of mentoring role at work. I must have seen one too many colleague complaining of boredom just before they filed their resignation.

But it occurred to me that I owe a lot to boredom: it was what spurred me to look for other things to do within the organization, eventually creating a new group (even if it’s a one-man group haha) and another slash in my job title.

Who’s afraid of boredom? After all, it’s what makes us human and not plain automatons.

***
Not so long ago, matters about virtual online gaming life crossing over the real one were usually limited to light topics like this one:

You know you’ve been playing too much MMORPG when…
- You think you can teleport or warp to get home after work.
- You start referring to your clothes and belongings as equipment.
- You challenge someone "PVP na lang" instead of "suntukan na lang".
- You yell “pa heal!” when you get hurt and "pa buff!" when you're tired.
- Your answering machine message says "AFK".
- You give your family a guild or clan name.
- You hit a cat with your car and you go back to see if there were any item drops.
- You sit down on the ground when you’re tired. 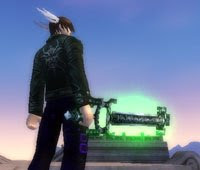 The online community has gone a long way since then. Right now I’m watching a channel on TV which features events and activities of one of the country’s leading game publishers. Amazing how the country's top gamers have been elevated to celebrity status, and online gaming has taken on a real, breathing, and dynamic lifestyle.

So real that it’s found its way to the local courts.

Thanks to my wife and her friends in the legal circle, I recently heard an account of a gamer complaining to a city prosecutor about his online character getting hacked and stripped of all its valuable equipment.

By sheer coincidence, on that same day I received a text message from our PerfectWorld clan marshall informing us that one of our officers was victimized by a hacker.

The clan officers recorded the in-game conversation between the hacker and our clan members through a series of screenshots as the hacker took control of our officer’s character.

It was eerie reading how our officer struggled to regain control of his character – two different persons with totally different ways of speaking (or typing, to be more accurate) alternately emerging from just one character.

It was like watching an exorcism in progress, and it was enough to send a certain chill down my spine.

The hacker got away with valuables and rare in-game items that took a lot of hard work, long hours, and, of course, real money to acquire.

There are people out there who can really pull off this sort of heist, and I doubt there are enough legal and institutional measures in place to catch them.

***
I’ve been asking too many whys lately – from the latest development in the “Nicole”–Daniel Smith saga, to how I feel, think, and react to certain aspects of life.

Resolving the latter on my own is easy, but my lifelong (adult life, that is) habit of approaching any research question by triangulation compels me to seek answers from others.

I may, at times, get tired of reality, but I doubt if I will ever lose this wonder. Believe it or not, it takes so little to amaze me – so little that I sometimes ask myself, “Where in the freakin’ world have I been?”

I’m just grateful I’m blessed to have met more evolved versions of myself, people who’ve been there and done that, and good folks who have the patience to listen to my questions and bear my naïveté.

What a sad day this turned out to be.

The only Pinoy rap artist that I listen to passed away.

Later, one of the Techies texted me that she is resigning, effective in two weeks.

Many may have learned this game in grade school -- during recess, lunch break, in the schoolbus, or in any crowd that has run out of anything else to do.

The game's rules are quite simple: the roles of a killer (the one who gets all the fun), a police (the one who stops the fun by catching the killer), a doctor (the one who keeps the fun going by reviving the murdered players, unless he himself gets killed), a judge (the one who, if still alive after the killer has been caught, gets to have fun punishing the killer), and as many civilians (just meat for the killer, and for the doctor's reviving pleasure) as needed will be raffled to players. The act of killing or reviving would be by a pre-agreed gesture, usually by winking or kindat.

There are many variations of this rule, but from grade school up to just a few days ago, I have always played the version where the killer could never kill the police.

Last Friday, my officemates and I played this game at Pork Barrel, and I was introduced to a rather different set of rules: a) the police can be killed; and b) the police can make the "arrest" only if s/he catches the killer in the act of killing others.

The new rules made a world of difference. No longer can the police boldly stare at anyone, wait for that fateful killer wink, then make the arrest -- s/he is as easy a target as anyone else.

Also, the killer can now wipe out everyone -- a perfect kill, as I would call it.

I admit that cops are not invulnerable the way the game has treated them for as long as I can remember. At least, that night, I played an old game that suddenly took a wide step towards reality.

A part of me, though, would also see that night as a case of misplaced empowerment.

Anyway, our little Friday group is still in a quest to fine-tune this game.

***
The late night news flashed a report about a man getting mugged by a group of minors. The TV crew even caught on camera the group of youngster casually jogging away from the man they've just robbed and beaten to a bloody pulp.

The disturbing part was how the barangay official officials admitted that such incidents have been the modus operandi of youngsters in their area, and that these kids, being minors, usually go scott-free.

A certain law has empowered kids like them. Unfortunately, the same law may make it hard for the poor, beaten man to find justice.

***
We don't allow misplaced power. We either bestow it, or willingly place ourselves in its embrace. Those who rightfully have it also have a responsibility, like what good ol' Uncle Ben always say.

Next time I will really carry antihistamines with me, so I could enjoy as much crabs and shrimps as I used to.