We had our office party last Thursday. Wrote about a part it in our unofficial group blog.

We still went to work yesterday, and tomorrow we’ll have things to put in extra work to finish a project before the year ends.

And again, I won't be going home this Christmas. I'm just looking forward for that short vacation from December 28 to January 2.

Sometimes I wish my family isn't so far apart. At times I wish I could have dinner with them everyday -- share their thoughts, listen to how their day have been, and be inspired on a daily basis.

To have these, I have to travel. And it could be so tiring. 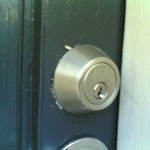 "Stop me!? He [the Emperor] invited me. By building his wall, he challenged my strength." -- Shan Yu, leader of the Hun army, from the movie "Mulan".

Certainly my wife and I were not trying to invite, much more challenge, anyone's strength. But this is how I felt when we discovered the deep scratch marks on the lock of our front door last night.
The intention to break-in was undeniable. Someone tried to pry away the deadbolt, and succeeded in forcing a gap between the lock and the door, wide enough to slip in a screwdriver. Luckily the lock assembly didn't break apart.
This has been the second break-in attempt since we moved in the newly-renovated apartment barely a month ago.
Before the renovation, there were only wooden doors with simple doorknobs and aluminum screens. Given the right motivation, the old apartment would have been a very easy target.
But as far as I can remember, the old apartment never had any break-in attempt.
The apartment now has steel doors, with just enough locks to allow us a certain degree of peace of mind.
But the law of escalation seem to have taken its course. The steel doors have brought in more frequent and more brazen break-in attempts.
On two occasions in the past month, we found muddy footprints on the balconies and deep scratches on the locks. The attempt yesterday would have been around 5:30 in the afternoon up to 9:00 in the evening -- while we were away to hear mass and have dinner.
These incidents somehow made me despise our neighbors more (not all of them, though) -- we've tolerated their rowdy kids banging and climbing our gates and leaving all sorts of rubbish at our doorsteps (all the while their parents watch from the other side of the street, doing nothing, and acting dumb when we tell them what their children are doing).
We've let them off easily when we caught them stealing electricity, or illegally hooking up on someone else's cable television (they won't admit it, of course, but it's clear where the cables lead to). We try to smile at them and greet them at every chance we get. We allow them to park their motobikes and pedicabs on our driveway at night.
All in the name of "pakikisama".
And yet the banging at our gates continue, the rubbish are still strewn at our doorsteps, and to think of their blank faces watching from across the street while someone is trying to break-in our house is driving me murderous.
Every break-in attempt is eating away at our emotional reserves, leaving Joan and I drained and depressed. Never had our sense of security been so violated.
But yes, there is always a choice. There's no need for us to stay in that place. I guess I was just hoping that people could still change for the better.
I hoped too much.
I forgot that some people have that penchant for breaking the rules and pushing our sensibilities to the limit. And some of these people live just across the street.
Sigh. While the plan to move is in the works, nothing else for us to do but to beef up our defenses and step up the gameplan.
It's the law of escalation.
Bring it on!
I've been dying to try those neat anti-burglar tricks in the movie, Home Alone.
Just kidding. ^^
posted by Leo at 12:14 PM 0 comments 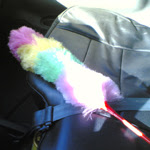 It was a typical morning drive -- light to moderate traffic, cool breeze, cool-headed and smiling motorists. Under these conditions, it takes about half an hour's drive to my wife's workplace, with speeds averaging at 50 kph.

The five MIBs (men in barongs) guarding the gate gave their customary greetings. Nothing unusual, so far. I drove in the compound and dropped Joan at the building entrance.
As I drove back to the gate, however, all five MIBs were looking at me (Swet! What did I do?). They signalled me to stop. One of them approached the side of the vehicle and stepped up the rear wheel to reach for something on the roof.
When he got off, he was holding our big, colorful duster.
"Ser, ano 'to? Nalaglag n'yo ba ito?" in his most authoritative voice. They were all smiling.
Well, at least I made their morning. ^^'
posted by Leo at 5:00 PM 0 comments

A season of giving... and taking

And at times, sadly, against your will.

The modus operandi of pickpockets or snatchers may already be familiar to most commuters of the metro. The details I know are based on accounts from those who've become targets -- or, in cases where the attempts were succesful, victims -- and from a personal experience not too long ago.

In over 15 years of moving around in the metro, last night was my second time to be a target (at least, one that I was aware of).

There were only four passengers in the UP Pantranco jeepney when I boarded it at Philcoa. A man, which hereinafter I refer to as Crook A, followed and sat at my right side. The jeepney has moved a few meters when another man boarded, and seated at my left side. I later found out that this was Crook B.

Crook A had his knapsack resting on his lap, and when he reached over to hand his fare, I got pressed between him and Crook B.

I was wearing formal slacks then. The pinch at my right front pocket was so light and seemingly so accidental that I initially thought Crook A was just digging in his own left pocket. But at the second pinch I saw in my peripheral vision that Crook A's right hand, partly covered by his knapsack, was unmistakenly scratching at MY right pocket, trying to squeeze out my cellphone.

I let go of the handrail and adjusted my seating position to give my right peripheral vision a wider view of Crook A. Unconsciously I started cracking my knuckles and flexing my wrists -- if I need to get physical with Crook A, the first blow has to be quick and sure.

I waited. In my head I was rehearsing: the cellphone had to out of my pocket and clearly in his hand, then a back-fist, grab his right wrist, another back-fist, push his face to the floor, place a knee on his back... (and praying my body would execute everything as planned).

Crook A must have sensed the change, because he withdrew his right hand and pretended to fuss over the straps of his knapsack, all the while slowly sliding away from me.

The expression of the man seated in front of me told me that he, too, saw what Crook A did.

Crook A became restless, and as the jeepney slowed down at the Agham intersection, he got off. Crook B, who was seated quietly and unmoving all the while (and, looking back, he didn't pay his fare at all), hurriedly got off too.

As the jeepney move, the man in front of me said, "Kasama niya yung isa, 'tol."

Geez. I completely forgot that crooks like these rarely operate on their own. 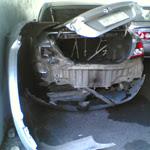 “Maybe this is a reminder,” sighed my brother as he pulled the sophisticated contraption of speakers, sub-woofers, and amplifiers from the rear compartment of his car – what’s left of it. “Maybe God is trying to tell me something. Maybe it can’t be just blessings all the time.”

I crawled out of the back door, clutching his stereo and whatever important-looking documents that were left inside the car. The other three doors were jammed, useless.

I slapped him on the back, marveling at the piece of miracle standing beside me. “You are alive and well. As I see it, your blessings never stopped.”

We stood there smiling and staring at his car, now a grotesque heap of twisted silver-gray metal. Joan and my sister-in-law were busy moving around it, taking pictures from different angles. “Maybe we’ll have one of these photos framed, as souvenir,” joked my sister-in-law.

It was a quiet morning of National Heroes’ Day. The company that towed and housed my brother’s wrecked car only had two staffs moving around the huge garage.

If there is a heaven for cars, this must be the purgatory. Cars with varying degree of damage are lined up neatly, waiting for their fate – whether to be repaired and revived back to roadworthiness, or be condemned to scraps.

One of the staffs approached us. When she learned about the accident, she told my brother, “Maswerte kayo ng kasama n’yo, Ser. (You and your companion were lucky, Sir.)”

Just a few hours ago, at 3:30 am, Joan woke me up and handed my ringing cell phone. My brother was at the other end, speaking slowly and sounding rather tired.

When he told me that he was in the emergency room of a hospital not far from our place, I jumped up and started dressing up. Joan, too, was immediately up and doing the same without a word.

By the time we left the house, my brother had given me the barest details of what happened: he and his colleague were driving back to the hotel where they were attending a conference, he swerved to avoid a car that suddenly counter-flowed, and hit an intersection barrier.

It was a nervous drive all the way to the hospital. Images of my brother covered in blood kept playing in my head, and the curfew placed by the government in Makati and other areas – after the stand-off staged by Senator Antonio Trillanes at The Manila Peninsula Hotel the day before – added to my anxiety.

The reports coming out of the radio about the large number of curfew violators being rounded up by the police did not help ease the tension either. At 4 o’clock that morning, Makati’s busiest business district was like a ghost town, and at every turn I was half expecting a police would pop out of the shadows to stop us for inspection.

The nurses at the emergency section, upon learning my name, directed us towards a door with the sign “Critical Care,” next to a door that says “Acute Care”. I was about to ask the nurses the difference between the two rooms when my brother was wheeled out, an embarrassed smile on his face, but with no visible injury. His companion came out, walking on his own, apparently dazed but uninjured.
Bills were paid, reports were filed. The curfew lifted, and somehow the day began to felt more like a real holiday, a small celebration of life. It was a day of miracles, short reunions, and small yet important reminders.
Stay safe and healthy, everyone. ^^ Drive safely.
posted by Leo at 11:33 AM 2 comments