My first dent (and some driving stories) 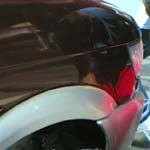 I have never incurred a single scratch on any four-wheel motor vehicle I've ever driven.

I’m usually careful when it comes to a lot of things -- money, dealing with people, work, dealing with relatives, taking medicine, playing a character in an online game (lag and disconnection are usually my only reasons for "dying"), and, yes, driving, among many others.

Two-wheeled motor vehicles, however, are a totally different matter. I’ve lost count of the times I crashed on those delightful speed machines. I even had my share of miracles in one of my tumbling, skidding, and crashing moments.

But I still am careful if a have a passenger. ^^

My first encounter with a four-wheeled motor vehicle was in high-school. Every time I visit his hometown in Batangas, my father would let me drive their passenger-type jeepney in delivering eggs to nearby towns. He'd only let me drive on national roads, and would takeover once we enter the busy streets. Bringing the jeepney in and out of the garage was also my task each time I'm around.

Dad usually had his "training stick" when I drive, and he'd smack my thigh each time he catches my foot lingering on the clutch pedal. I once hid his stick, but his left hand was more than adequate in delivering the same effect.

"Never be a clutch driver," he would remind me.

Driving became scarce in my college-days, but it was then that I had my first lessons on a gasoline-engine, compact car – a Daihatsu Charade, to be specific (hi Cez!).

Cez was so kind (and brave) to let me practice on her car around UP Campus. I'm sure I gave her several heart-attacks in the process, but it was from her short and very memorable driving lessons that I ultimately got rid of my lead foot.

Since then, I was back to driving diesel-type vehicles – either my mother's old custom-built Wrangler, my father's owner-type jeep, or our handy-dandy AUV.

But all these years, and not a single scratch, much more a dent.

Until last Saturday, when I nicked the steel gate while maneuvering out of the garage, leaving a 2-inch dent on the right-side, front bumper of the AUV.

Sure, the garage was relatively new, narrow, and steep. Plus our neighbors love to leave their children playing at the driveway, and uhm I rather take the metro rail transit than drive. But... hitting the gate?

A gate! While leaving the garage!

Not from the horrible traffic in the streets of Mabini or Adriatico when Robinsons Place has its sale, nor from the typical Metro Manila motorists who love to get up close and personal with fellow drivers, nor from motorbikers who seem to think they are made of indestructible metal when passing in-between cars at top speed in EDSA.

But it happened, and now the dent felt like a stigma, burning my pride like a failing grade in PE, or an ugly, red mark in my transcript of records.

In the past few days I've been unconsciously surveying the vehicles I see, hoping to find similar damages, just to tell myself that things like this happen. The city of Makati, however, isn't helping my spirits at all, since most cars in this area look so shiny, squeeky-clean, and sooo scratch-free.

Sigh. First time for everything...
posted by Leo at 1:54 PM 4 comments