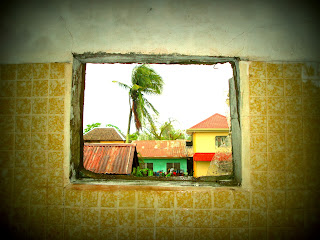 It's been raining non-stop since I arrived here at the old family house in Batan, Aklan. When I took my first shower, I can only thank the heavens that the house is still intact (and that the second floor bathroom is still there).

We were lucky. Most of Yolanda's wind was absorbed by our neighbor's 4-storey apartment building from the north, while another building shielded the south side.

My mother already had most of the roofing repaired, except for the small patch at the second floor bathroom. So... it was quite a shower experience: rain trickled through the kisame (speeding up my rinsing process), and with the solitary glass window shattered, I can see the world outside and (gasp!) vice-versa.

The house is structurally intact, half of the appliances still work, and most of all, no one got hurt. That's so much to be thankful for.

What a year this has been! I don't remember ever having gone through so much turbulence in my personal life -- both at work and with family.

But with every turmoil and trial come the most memorable times of my life.

2013 is a year I should not forget. In no particular order, I look back at my personal highlights.

Early this year, on March 27, our father joined the Creator. He was a pioneer in his family, the very first to venture out of the very small family, geographical, and cultural circle that his clan has known for so long. To some, he was that one fruit that fell a tad too far from the tree. But in his last moments, he did good on his promise to bring us back to the roots.

We love you, Dad. We miss you. Happy New year!

Walker's death has been particularly shocking to me. Sometime this year HBO featured Fast Five, and somehow I never grew tired watching it again and again. My wife could attest to this, but I had commented endlessly how well-written the script was.

I give thanks for Joan's smooth transition at work as her former boss retires from the judicial profession. Her new office/boss takes her closer to home, and I probably should be ready to take my work somewhere else anytime soon. ^^

I've seen Mayon Volcano, finally, and it is every bit as awe-inspiring as I imagined it would be back when I was just looking at the postcards.

I can also now cross-out Sagada in my Local Places to Visit list.

A Catholic pope resigned -- something uncommon in anyone 's lifetime. The Catholic world was then presented a Pope unlike anyone before him, and he wants scientific data! Oh he gets the researcher in me so excited!

After over 15 years with mother station, I have an idea of what my weaknesses are, and one of them is handling people. This is the reason why I worked to have the communications and publications section established. Most of time it's a one-man department, but what the heck.

Every now and then, however, due to the sheer size of a project, I get drafted to do field management.

This year saw one of the biggest, most expensive projects the station has ever handled. The project was so crucial there was no room to freely choose the place to go to -- we were assigned based on how well we know the place, the people, and the language. So I, naturally, got assigned to Region VI.

Perhaps due to age and *cough* rank, my old fears were things of the past. That project re-acquainted me to all the things I love about fieldwork -- meeting new people, traveling, getting stranded in strange places, riding motorbikes on remote provincial roads, and, with some luck, rocking under the starry sky to the songs of some of my favorite local bands.

It was a difficult project, both technically and emotionally. The survey instrument was so hard to implement, and the subject re-opened our eyes to the harsh reality of poverty. We've seen mothers who never had any kind of pre- or post-natal care, children who never had a single vaccination, students who walk miles to get to their classrooms, and families so poor the only toys their children play with are the bolos and knives their parents use in the farms.

But these families opened their doors to us in complete trust, offered what meager food they have in their pots, and answered in earnest as we interviewed them for an average of three hours. This sort of hospitality is something you won't find so easily in the cities.

The project broke all our hearts, but made us better persons and so much grateful for the blessings we have.

Oh, and that project made me realize how susceptible I am to aswangs. Tsk. ^^

This year Joan and I explored alternative Chinese medicine (acupuncture), and had good results. The root of all my medical woes can now be explained in three words: I'm too hot. ^^

A friend of mine, Cath, came across my Guimaras experience and shared it to her sis, who then requested through Cath if she could share it to her reading class.

That blog entry of mine for a reading class? Oh dear... With the "sh*t" and unedited grammar? :))

But I agreed to share it, of course. Please do remind your sis about the "non-academic words" there, Cath. Hee hee.