… two unforgiving elements that seemed to have overwhelmingly ruled my life over the past two months.

As of blog time, it’s my eleventh and last day in Italy -- the longest and farthest I’ve spent away from home since I got married. Had my heart been a tad weaker, the separation anxiety pains I had before I left would have killed me.

But the good thing is that my travel home will begin two hours from now. Very soon those eleven days won’t mean much except for their wonderful memories.

Goodness. What have I been doing this July?

So many things to tell, but so little time. Will get back to that later. Right now it’s time to pack up for the long trip home.

***
Another piece of my generation's history became yet another memory.

The recent days have been so full of him – news, tributes, documentary specials – that it seems he is more alive now than he has ever been before he made his announcement of a comeback concert.

He is defying boundaries, again: neither black nor white, neither man nor woman, neither dead nor alive.

***
Some weeks ago, Joan and I went out with her Dubai-based relatives to inspect some model condominium units and houses in Makati and in Carmona, Cavite.

These "show units" were supposed to feature the best that the company has to offer when it comes to themes and space usage. If they were meant to dazzle, it worked -- on me, at least.

Looking back, however, there was something different about those model units. Most of them have glass walls.

Thus the illusion of space.

I wonder if these model units would still be as appealing once the glass walls were replaced by “real” walls. 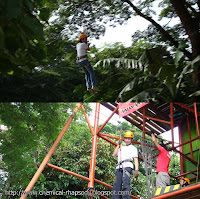 Finding a little piece of nature in Metro Manila is always a treat.

The La Mesa Ecopark has picnic grounds, swimming pools, fitness trails, butterfly farm, boating and biking areas, a mini-jungle, and even facilities for wall-climbing, rappelling, and zip-lining. We tried the last one for a few seconds of thrill.

The place is huge. It’s hard to imagine something like that could be in Quezon City. With the right eye, the La Mesa Ecopark provides endless possibilities for nature photo shoots.