Okay, that's enough Garfield for today. No nightmares for me tonight, too tired to have one.

Cheers to another year. ^^

Thank you to my neighbors here for the greetings:

Dyoonet, for that friendster note.

and Raindir, for the offline ym greetings.

I was hoping the Beijing Olympics will erase the Onyok Velasco stigma some years ago, and restore my faith in boxing as an Olympic event.

But unlike swimming, judo, and weightlifting, which kept me wide-eyed in awe, concentration, and admiration, watching boxing got me so frustrated and had me shouting "WTF!" more than I usually do during the daily morning rush drive to work.

I've caught portions of two boxing matches (I couldn't bring myself to watch till the end), where Canada and Australia (?) suffered the worst kind of defeat: "outclassed", 20++-to-zero, "one-way-street", "what-the-hell-am-I-doing-here" kind of defeat.

Both losers have something in common: they wore blue, and their scores simply refused to move up despite delivering visibly solid hits.

Since then, I refused to watch the boxing events.

And the color he's wearing?

I wonder if the judges around the boxing ring had their eyes checked.

The overall color of the ring -- its canvass, ropes, etc. -- is shades of blue.

Thus the fighter wearing blue uniform and blue gloves would tend to melt in the background, while the one in red would stand out, majestic and powerful -- so powerful that a simple swing could look like a freakin' Mike Tyson punch.

That's just a theory. Maybe the Olympics Committee should consider this, as well as the rules they use.
posted by Leo at 12:28 AM 0 comments

Past a certain threshold 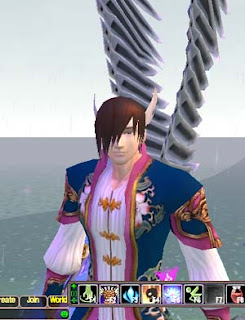 While it's true that electronic gaming is close to my heart -- the grade I had for my undergraduate thesis on that topic would be some proof to that -- I was not, am not, nor will ever be, good at it.

I would classify myself somewhere in the "casual gamer" or "play-when-it's-free-during- absolutely-free-time" category, opposite the "hardcore gamers" and "hobbyists" at the other end of the scale.

In my recent visits to the online world, I think I crossed another threshold that may be worth noting (more for my own benefit).

My first mention of Perfect World (PW) in this blog was six months ago. Back then I was already feeling the first signs of boredom due to the somewhat repetitive scenarios and increasingly slow development at higher stages typical of MMORPGs.

Until my online character passed a certain level when something in the game’s system kicks in.

PW has a certain scheme that assures players, after reaching a certain level, a daily supply of that precious experience and soul points, thus allowing us to level-up with minimal effort.

Gain points without breaking a sweat? And with every level comes new scenarios, new stories, better things to do?

It was a sweet deal for casual players like myself who sorely lack internet connection speed and the time to go online.

And so... the game stayed in my hard disk.

This scheme proved to be beneficial. After several months, during occasional insomnia attacks, my online character managed to reach level 60.

Reaching 60 in PW opened up a lot of things. Most significant of which, in my opinion, would be getting invitations from relatively more established and more organized Clans.

It was a refreshing change. Such Clans have recruiting officers who usually know how to politely reply to my typical response, "Thanks, but sorry I'm not very active," when my character gets invited. And they usually do so in correct English or Filipino, and (thank goodness) with correct spelling.

Over three months ago, I had an invitation from a clan officer who was more earnest and persuasive than anyone before. 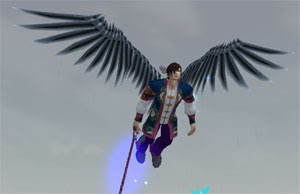 And so I joined, and became the Clan's resident "lurker/AFK (away from keyboard)" member (I'm such a useless member, I know). Being a healer class, when time allows it, I try to do support and "ambulance" duties.

But certain pressures stirred within (I was afraid of this): I want to keep up with everyone. I wish I could be as good as the rest, if not better. Most of all, I wish I could do more for the clan (I can't help it -- they're such a helpful and jolly crowd. Though tuning in to their chats sometimes drive me nuts).

After passing another threshold.

I don't think I'd be moving anywhere in the gamers' scale soon.

I was left in awe by the deluge of ads celebrating the Olympic spirit -- images of human power, pain, joy, fun, and victory.