I was almost an hour late for work yesterday when my usual route got blocked by road constructions along Espana Avenue in Manila.

It's normal for government infrastructure projects to sprout like weeds as another fiscal year comes to an end. However, with just a month to go before the Arroyo administration ends, I'm not sure if these massive road constructions are preparations for the rainy season, or just last-minute hustle for more corruption money. Oh well, it could be both.

The re-routing was unplanned as no proper scheme was in place. So thanks to my pathetic navigation skills, it was easy for me to get lost after missing the tiny and obscure sidestreet that could have put me back on course.

That brief moment of being lost, however, was strangely pleasant. The unfamiliar streets gave me refreshing new sights as I groped my way through the innards of Manila, Balintawak, and Sta. Mesa.

But I guess that moment was pleasurable only because I had plenty of fuel in the tank, and I'm no longer required to check-in with the office bundy clock.

***
I've been wishing for the rain, and it finally arrived yesterday.

It brought flooding, too.

At least, I got what I wished for. Like many things in life, it's a package deal. Not much room for complaints, I'm just glad it's there.

***
I'm still finding my way back after missing a very crucial detour in the past.

I want to be in that familiar route again, even if so much has changed. 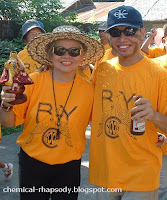 I may not have her genetic and psychological makeup, but I'm sure darn proud that we have almost identical signatures.

Just one of the thousand things I'm thankful she's my mom.

I found myself reciting these words more and more often over the past weeks. With just hours before the elections, I’m almost wishing that when I say those words again (complete with the requisite hand signs haha!), many Leos would appear in a puff of smoke.

Imagine having my clones help me with work, household chores, and visit loved ones in other places. Cool!

But, truth is, I am terrified with the idea of facing another Leo.

I’ve played this hypothetical scene in my head before: “How will I raise a child who is exactly like me?”

I imagine that for the most part of his/her developing years, raising a child with my exact same frame of mind would be a breeze.

The tricky part would be when the child begins to be aware of his/her emotional weaponry, especially those that I’m not so proud of. My father and his father have them, and apparently I have them, too. Few have seen the kind of monster I can turn into, and to those few, I offer my never-ending apologies.

Of course there’s always the good side. I have blogged before of people I’ve met who represent better versions of myself – highly evolved in everything we have in common. I’m eternally grateful having met these people.

Facing myself would probably be great, but I say the world is better off with just one Leo.

***
I had my share of mistaken identity way back in high school. It was a simple question, “What were you doing in Iloilo?” from someone so convinced it was me he saw that day. The problem was that I’ve never been to Iloilo yet at that time.

For years I’ve treated that incident as a simple case of “mistaken identify”. It was only just recently when an incident made me realize that, maybe, there was more to it than just someone out there looking like you.

I saw Gem one Monday evening while I was on my way home. I would have called out to her, but the jeep moved along before I got close enough.

The following day I wrote her a note in FB checking if she was in that area at that time. She then went online in YM to confirm that indeed she was. The only thing that didn’t fit was that she was not riding the jeepney at all.

I’ve met Gem in person only once, but I was 99% sure it was her I saw that night.

***
I have always thought that it is not a good sign when people allegedly see “you” in highly unlikely time and place. The literature I’ve been exposed to speak mostly of bad things when people encounter their replica.

Doppelgänger. The closest encounter I had with anything of this sort was some time ago in Batangas, when one late afternoon on our way home, a farmer told me and my cousin “Dumaan na kayo dito kanina lang ah” (You already passed here just a while ago).

Kinda creepy, but nevertheless a harmless incident. None of the accounts I’ve heard about such sightings placed anyone in mortal peril.

But as Gem and I were discussing the night I saw someone I thought was her, she presented a more extreme possibility: you cannot come face to face with your other self because one of you will die.

Well, at least that pretty much solves my worries about meeting that other Leo.

Still, real or not, I hope we stay clear of our other selves.

***
My first encounter with Gem was online, in the world of Pangu. She was then the Marshall of Sanctius, and eventually became the final puzzle piece to a lingering personal question I have about online gaming: can a camaraderie borne within the confines of a game be real?

There are many groups out there that could have easily answered my question, had I put serious thought about it. I thank those who have offered me membership (Ria, your offer to introduce me to HOL looong time ago was most appreciated ^ ^), and I give special thanks to Sanctius because somehow they found me in the most unexpected time -- the right time haha!

And like the first time I met Gem as the kind and generous Yu Ling (Priestess) in Perfect World, meeting her and some of the Sanctius folks in person on this day was just as magical and memorable.